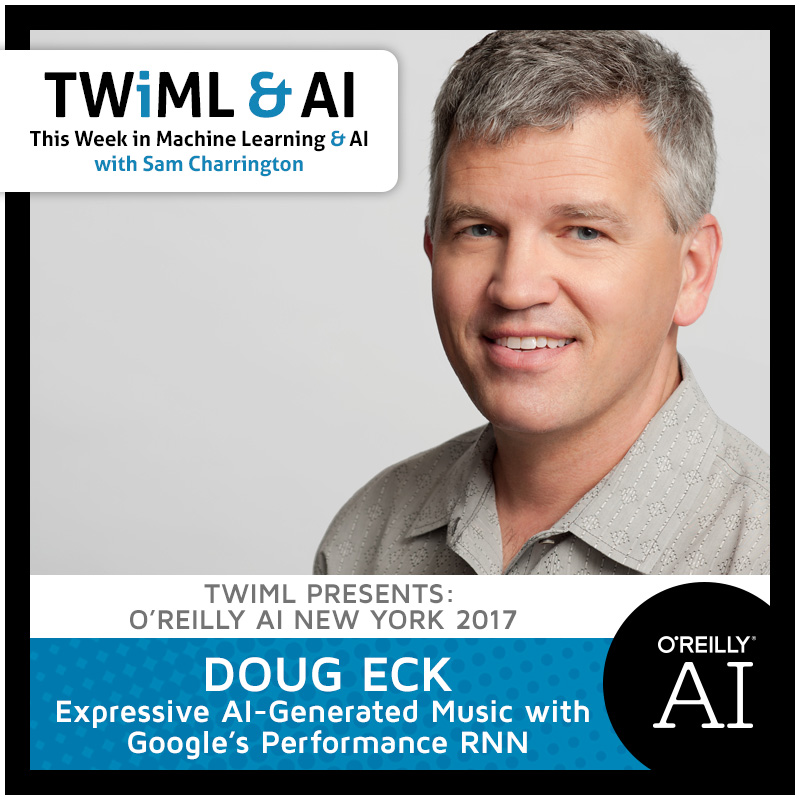 My guest for this second show in our O’Reilly AI series is Doug Eck of Google Brain. Doug did a keynote at the O’Reilly conference on Magenta, Google’s project for melding machine learning and the arts. Magenta’s goal is to produce open-source tools and models that help people in their personal creative processes. Doug’s research starts with using so-called “generative” machine learning models to create engaging media. Additionally, he is working on how to bring other aspects of the creative process into play.

We talk about the newly announced Performance RNN project, which uses neural networks to create expressive, AI-generated music. We also touch on QuickDraw, a project by Google AI Experiments, in which users as Doug describes it, “play Pictionary” with a visual classifier. We dig into what he foresees as possibilities for Magenta, machine learning models eventually developing storylines, generative models for media and creative coding.

Thank everyone who’s taken the time to enter our AI Conference giveaway. We’ve got a couple of exciting updates for those of you who want in on this opportunity. First, we’re making it even easier to enter our ticket giveaway for the San Francisco event! Second, we’re giving away two tickets now, not one! To enter the contest in 30 seconds or less just hit pause now and visit twimlai.com/aisf right from your phone!

Thanks to Our Sponsor

A big thank you to Intel Nervana, who is supporting this podcast series. I’m very grateful to them for helping make this series possible, and I’m excited about the cool stuff they launched at the O’Reilly AI conference, including the Neon framework and Nervana Graph announcements. Be sure to check them out at intelnervana.com, and let them know via Twitter @IntelNervana how much you appreciate their support of the podcast.