We recently ran a series of shows on differential privacy on the podcast. It’s an especially salient topic given the rollout of the EU’s General Data Protection Regulation (GDPR), which becomes effective this month, not to mention scandals like the Facebook/Cambridge Analytica breach and other attacks on private data.

If you hadn’t previously (or haven’t yet) heard the term differential privacy, you’re not alone. The field is relatively new–only about ten years old. Differential privacy attempts to allow data holders to make confidential data available for analysis or use via a data product while simultaneously preserving–actually, guaranteeing–the privacy of the individuals whose data is included in the database or data product.

Differential privacy is often introduced in contrast to data anonymization. While anonymization might seem to be a reasonable way to protect the privacy of those data subjects whose information is included in a data product, that information is vulnerable to numerous types of attack.

Consider, for example, the Netflix Prize, a frequently cited example. In support of a competition to see if someone could build a better recommendation engine, Netflix made an anonymized movie rating dataset available to the public. A group of researchers, however, discovered a linkage attack that allowed large portions of the data to be de-anonymized by cross-referencing it with publicly available IMDB user data.

In another example, an attack called model inversion [pdf] was used to extract recognizable training images (i.e. faces) from cloud-based image recognition APIs. Because these APIs return a confidence score alongside the label of a face submitted for recognition, an adversary could systematically construct an input face that maximizes the APIs confidence in a given label. 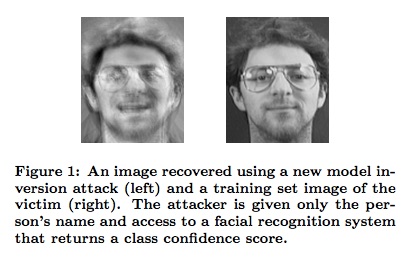 Aaron Roth provided a great example of a simple differential privacy algorithm in our interview. In his example, a polling company wants to collect data about who will vote for Trump in the upcoming election, but are concerned about the privacy of the people they poll. Roth explains that they could use a simple yet differentially private method of collecting the data. Instead of simply asking for the pollees voting data, the company could instruct the individuals to first flip a coin and if the coin is heads, answer the question honestly, but if the coin is tails, give a random answer decided by another coin flip.

Because the statistical characteristics of the coin flip are known, you can still make inferences about the wider population even though your data collection has been partially corrupted. At the same time, this method ensures that the individuals in your study are protected by plausible deniability. That is to say, if the data were to be exposed there’s no way of knowing if a given answer was honest or part of the injected noise.

Some tech companies are already starting to reap the benefits of differential privacy. For example:

Open-source tools for differential privacy are beginning to emerge from both academic and commercial sources. A few examples include:

Differential privacy isn’t a silver bullet capable of fixing all of our privacy concerns, but it’s an important emerging tool for helping organizations work with and publish sensitive data and data products in a privacy-preserving manner.

I really enjoyed producing this series and learned a ton. I’m eager to hear about what readers and listeners think about it, so please email or tweet over any comments or comment below.