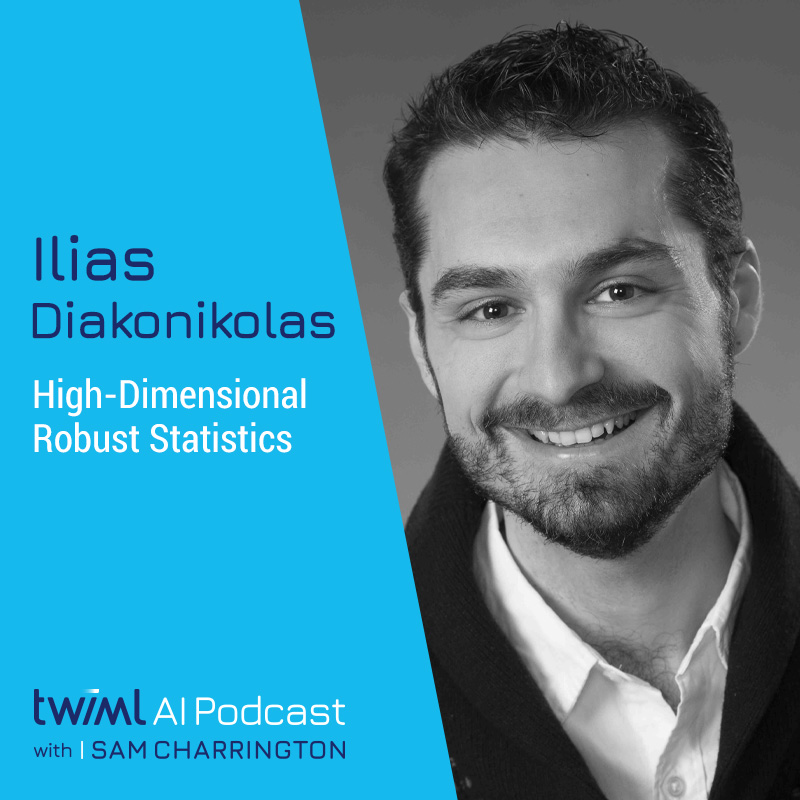 Ilias Diakonikolas is faculty in the Computer Science Department at the University of Wisconsin-Madison where his main research interests are in algorithms and machine learning. His work focuses on understanding the tradeoff between statistical efficiency, computational efficiency, and robustness for fundamental problems in statistics and machine learning, where robustness refers broadly to a model’s ability to deal with noisy data.

Ilias recently won the Outstanding Paper award at NeurIPS for his work, Distribution-Independent PAC Learning of Halfspaces with Massart Noise, which focuses on an area called high-dimensional robust learning and is essentially the first progress made around distribution-independent learning with noise since the 80s.

*Nerd Alert!!* If you enjoy our more technical conversations, heads up that this interview won’t disappoint.

Statisticians and computer scientists have long since developed algorithms that can weed out noise when the input data is only a single or a few values (dimensions). But with high-dimensional data like images or medical records, separating the good data from the noise remains a challenging research problem. Ilias emphasizes that, “Even a very tiny deviation from the assumed model could make the machine learning algorithm very very fragile…we need to rectify this and develop a methodology to have robust learning algorithms for high dimensional problems.”

The robust learning problem that Ilias is working on differs from other research on robustness to adversarial attacks in terms of when the data is perturbed. Typically, in the adversarial robustness scenario, you assume the model is trained with clean data and the goal is to improve its performance when presented with corrupt data (i.e. a test-time attack). For the type of robustness Ilias is working with the model is trained on corrupted data from the beginning (i.e. a training-time attack).

Consider the problem of estimating the mean of a group of independent and identically distributed (IID) samples. As you probably know, the process is fairly simple (take the sum and divide by number of samples). But if there’s an outlier that is not from the distribution you assumed, then your mean would be wrong and your estimate may never converge to the true mean (because it could be arbitrarily far from the true mean). If you’re only operating in a single dimension, you can get around the problem of the outliers by taking the median instead of the mean.

If we apply this same method to high-dimensional data points, and your data is clean (meaning drawn from a single distribution), then you can similarly calculate the empirical mean. However, if your data is corrupt and has a lot of outliers, then the approach of taking the median won’t work.

In a high-dimensional setting, you can’t look at individual coordinates and calculate the median because noise can accumulate across multiple dimensions, and the amount of errors can scale to a very large amount. This can be avoided with information-theoretic bounds, but using a computationally efficient algorithm is not something we knew how to do.

The goal of this paper is to find an algorithm able to fit a linear model to noisy, high-dimensional data. Specifically, it aims to perform binary classification, that is, applying a linear separator that distinguishes a point into two classes: positive or negative.

“What we show in this paper is that, in fact, in a very reasonable model of random label perturbations, this is something that…can be done with a computationally efficient algorithm…You can actually learn linear separators efficiently in the presence of noise.”

Let’s explore the terminology introduced in the title of Ilias’ paper:

Distribution-Independent. In observing labeled examples of x (points in high dimensions) and y (binary labels), we don’t need to make any assumptions about the x’s! We can simply assume that our x’s are IID samples and from some fixed distribution—but even that can be arbitrary because in reality, you might not know anything about the distribution of the data.

PAC Learning (Probably Approximately Correct). This is the standard model of binary classification given by Leslie Valiant in the 80s, and similar models by Vapnik, where you try to find a classifier that generalizes over unseen data.

Halfspace: The linear separator we seek between positive and negative classes.

To try to solve this problem, Ilias and his team’s initial approach was to try to use good-old, handy-dandy Stochastic Gradient Descent (SGD). Unfortunately, they learned that not only would SGD fail, but they proved that it would be impossible to use to solve this problem.

However, all was not lost. In the process of proving the intractability of SGD, the team discovered that SGD can actually solve a non-trivial part of the problem. This was enough to give them a toe-hold, and this paper presents an algorithm for iteratively letting SGD solve that part of the process, and then re-running it on what’s left getting more of the solution each time.

For Ilias, this is just the beginning, “In some sense, [this] is the first paper in this line of work of doing distribution-independent learning with noise…and I believe it’s going to lead to many developments.”

A related venture is a survey Ilias worked on with longtime collaborator, Daniel Kane called Recent Advances in Algorithmic High-Dimensional Robust Statistics. The survey covers an overview of about a 100 papers exploring the techniques that have been developed in the space so far, and evaluates what direction the community should go in next. The survey will be published soon as part of the book Beyond Worst-Case Analysis.

One of the practical implications of robust statistics is the prevention of data poisoning. Data poisoning is the phenomenon that occurs when you have incoming data from outside and the system is vulnerable to malicious users who insert fake data that destroys the behavior of the model.

While the potential for applications is large, what’s holding back widespread implementation is that the algorithms use spectral methods, and are not automatic as the machine learning community wants them to be. Further, many real-world problems are non-convex, meaning that SGD can’t be applied directly. Ilias believes that can change soon, and is currently working on eliminating the algorithmics and giving structure to these non-convex problems to formulate them in such a way that SGD can sufficiently solve them.